Souza once wrote, “I express myself freely in paint in order to exist.” This is often quoted as a reflection of who Souza was. Equally often, the art world wonders why, unlike other artists, Souza didn’t destroy more of his work that is deemed inferior or even bad. I’ve thought about this question myself. But I never put together the relationship of one action (painting to exist) with the other (the inability to cull his oeuvre), before the idea for this exhibition was conceived.

Now, at the end of a show that represents a broad spectrum of Souza’s ideas and deliberations, his altering styles and materials, albeit in a single medium, I have arrived at an answer to the question of why Souza kept so much of his work. It is not the whole picture; there will never be a whole picture for an artist as prolific and complex as Souza was. But it’s hopefully a beginning, a jumping off point, which is also the dynamic of this final chemical (No.38), and so I think a good place to lay down my thoughts.

Imagine if you gave your life to one thing (not many of us do). For a moment, think about what Christ had to go through to save the world from Hell, or Gandhi to liberate India from the oppressor. It’s a very hard choice, to dedicate your life to one thing alone. It means you give up everything else. You reject whatever stands in the way of achieving your goal, and you surrender your heart and soul to the process. If you can imagine this degree of surrender, it becomes easier to understand why Souza rarely destroyed his creations, why he suffered so much in his life, and why those whom he loved suffered with him.

Everything he created reflects his surrender to the God of Paint and the Mistress of Art. In Words and Lines he wrote: A work of art…is an act of humility. In this painting we see his genuflection to the Cosmos.

Again, from Words and Lines:

After observing with wonder the infinite skies as far as possible with naked eyes from a small hill on a clear and star-filled night, you ask me to fix what I saw as well as what I know of the unknown infinite in writing! Countless suns and stars, spheres in space, dots in the blue, cold and milky spots that are really swarms of boiling suns, processions of planets possibly inhabited. …What I do know of the infinite is merely from popular science, not from scientists. But without being discouraged I go down to my studio and put a dot on a small piece of paper and I say to you: ‘Here you are, I have reduced the cosmos to a point. This dot is infinite. Do you see my point?’

Painted on the verso of a Life magazine cover (March 20, 1970), perhaps this piece was made in response to the cover story, “The Pope’s Unruly Flock.” Before the pope, before an unruly flock, before culture and religion, before Life (not the magazine, the real deal)…in those billions of eons before time, everything exists but has not yet been born. This painting is the face of Lord Vishnu and the spirit of Atman. It is the birth of the cosmos, the dot that is the Infinite. That dot created the artist called F.N. Souza. It allowed him to paint freely in order to exist. On January 31, 1969, the night he created his first chemical painting, he wrote, “Artist with no paint, no money to buy paint, paints without paint. That’s how strong the creative process is, making something out of nothing.”

Chemical (No.38) from the catalogue that accompanied the exhibition Painting Without Paint: The chemical paintings of F.N. Souza, at R.L.Fine Arts Gallery in 2007. 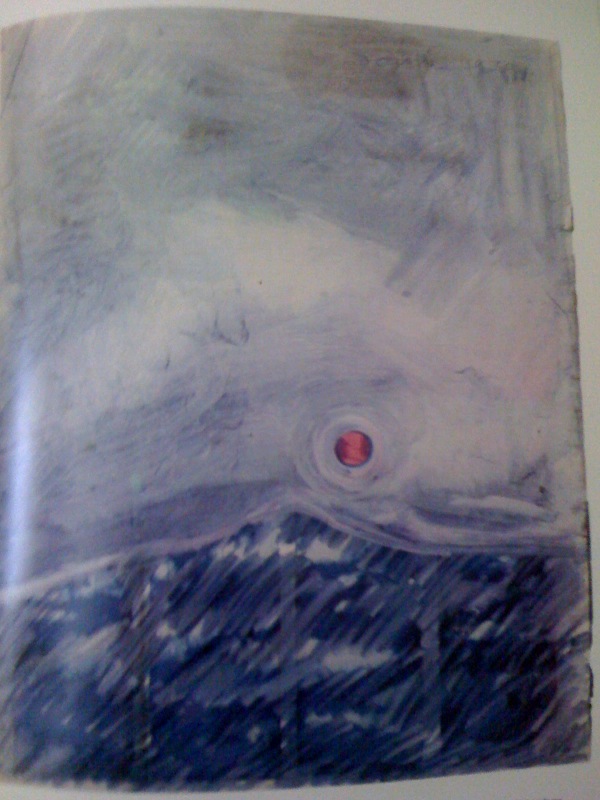